March, the month where it snowed and my neighbours still left the front door open on the flats where I live.  I'm convinced that humanity is really just composed of people who're full of self interest.

The art I pushed onwards with this month was:-
The screen to the game I'm making, though I'm still not sure of the name...  I was thinking "The Ice-shaper" but the more I look at the picture, well the less I feel that I should be trying to change it to fit the title of the story, even though I haven't really got much of an idea of the overall story, beyond a few basics that is.

This is the start screen:- 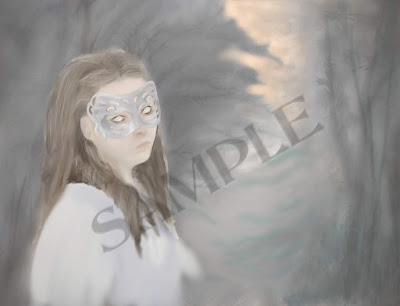 Which I started the other week, testing google hang-outs. :)

Well I'm stuck with it at the moment, because I can't work out what I need to do to improve it.  I'm not that good an artist.  It's supposed to be a foggy snow scene, with the mystery figure, who will probably be the one to blame for all the bad stuff happening in the game...

I worked on some 3D stuff too, and spent a few days tearing my hair out, as it was better than head-butting the monitor.  It's supposed to be for the untimely death screen of the game, with game over in it's middle.  I was trying to run a physics simulation on it though, with trying to get coins to fall correctly, so I had a small pile of treasure, plus the basic items, but it took over 26 hours and was still going. I reallllly need a better PC. 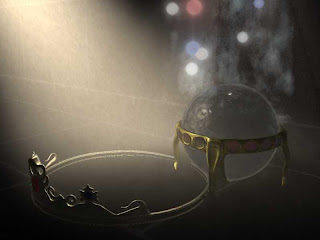 It's an attempted remodelling and render of a scene I created back in the day for someone else's game, with truespace 4.3.  The package I use today is Daz Carrara, though I'm kindof ashamed to admit that to most people as it really is a 'lower end' piece of software that only poor people use... But yeah, I'm poor :(.

The old version (made in truespace) is here:- deviantart.

I've been doing other things too, but most aren't huge or wonderful. Like making a banner to link to my deviantart account, for forum signatures and whatnot:

I've done little things mostly, watched videos on how to be someone who's actually good at art, and then the big project was the game.. I've had RPGMaker VX ACE for just over a month now, and don't feel like I've produced a whole lot with it.  That's detailed in my other blog though, relating to game art.

That's the round-up done for March, hopefully I'll have some new stuff to post here soon this month.
Posted by Spacecookie at 1:25 pm No comments:

New day or late evening of a new day, yes, that's it.

So what I've been doing lately is, apart from procrastinating, working on the new prospect provided by my purchase of:-

Yes, I've entered the world dominated by Jrpgs, that is Japanese Role-Playing Games. Though my opinion that they aren't really much of anything to do with roleplaying aside, this could well be the way forwards for me, as there are many groups seeking commercial standard team members and so here I am, with stylus and tablet at the ready, putting together a bit of a portfolio.

I'm going to start this with doing artworks for opening screens, character art, and also even sprites and such.  I think it's more commercially promising than anything else I've been trying so far.

So wish me luck, for what it's worth, heh.

I'm also going to attempt a project of my own, for the ol' portfolio, as a sample of what I can do with my brain and my fingers, with maybe an eye or two thrown into the mix, and also some other organs perhaps...

My starting point is just posting on the forums, so that people get used to me.  So after I've made a bit of a nuisance of myself now, I'm going to attempt some art challenges on there, the first of which is to attempt this:-
http://forums.rpgmakerweb.com/index.php?/topic/6655-the-daily-sketch-thread/ 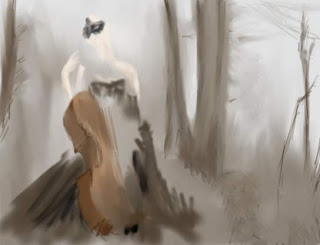 Posted by Spacecookie at 10:59 pm No comments:

And so, curtains for thought.

Here I am, facing today.  As far as I understand it's been raining again, and yet, it's another day where I've not opened my curtains and so don't actually know what the weather has been like.

Before we go any further, this is a fine pictorial example of curtainage:-

A lot of people seem to measure things by curtains I've realised, and that is mainly if a person is awake or not, or perhaps dead, though having typed that I realise that not being awake could also be covered by the label 'dead'.

Well as far as I'm concerned, for me, being awake and those items called curtains have no connection as such.  Sometimes I open them before I go to bed, and sometimes I open them after I wake up.  I might open them before I go out, or I might take the other option and close them, or I might not touch them for days.  To my neighbours, this is a source of great consternation, and I'm obviously, lazy, dirty and a useless leech on society and all its resources, for my failure to adhere to the unspoken rules of curtaining.

I could be dead though, and seriously, at least one of the two cats would probably be dead by the time anyone bothered to check.  People back where I grew up used to close the curtains as a mark of respect, if somebody who had lived in the same street had died.  So hey, maybe I'm just pre-empting my demise and paying my respects to myself.  Sub-concious self respect, what a wonderful thing to realise that I've held it within me this whole time.

Currently munching a warm croissant, while considering the rest of this evening, and how I can upset the order of the universe by just not doing something, or just plain doing something that is not on other people's schedules.
Posted by Spacecookie at 6:37 pm No comments:

New art for a new year.

I promise to try harder with my art.  To really push myself as much as I physically and mentally can within the realms of possibility, for as many days as I can non-stop.

First piece for this year, and first step is this:- 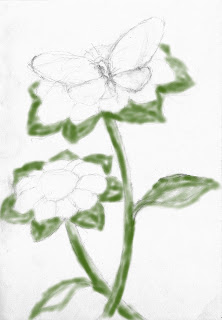 So I'm going to have to go back to what I used to do really.  That is: Wake up and start doing art, until I fall asleep later that night from exhaustion... doing art.

This is the last year I'm going to get to try this, and to possibly get any where with my art, so it's worth me pouring myself back in to it.  Plus I kind of have that magical feeling back that I used to get when I created some of my finest work.  It's something that I haven't quite worked out, but it's to do with longing, love and the depths of my feelings, to create beauty as I can't create it in any other way that I know of.

And sooooo, here you go. My latest one.  Scanned the sketch in and then applied the basic dark areas.  Tomorrow I work towards it's improvement.
Posted by Spacecookie at 2:12 am No comments:

Well this is inspired by the fact that a lot of artists seem to have a blog these days, and it seems like a relatively sensible way to communicate something more specific to myself than many web sites allow.

The things I'm personally involved in presently, and so are likely influences for posting material are as follows.:-

I am a digital painter and artist. A small selection of my art.

I currently have many ideas for new pieces of art, buzzing around in my head, but I know I'm limited by my ability, so I'm practising an awful lot.  People don't seem to see this as important though, and keep telling me to get a job and to sort my life out etc. Just because it doesn't earn an income!! Some people, honestly. Just because they never reached for a dream in their life...  Sorry it's a pet hate.

I draw and paint traditionally as well as on computer, and am currently painting a guitar, which I've re-started a lot of times, because I wasn't happy with how it was looking.  I'll post a picture of how far it is presently, when I get 5 minutes free to do so.

Interactive fiction: Well there's this whole part of my life that I just can't dump, and it's involved very much in the worlds of my imagination. it started off when I was very young and had to teach myself to read English, when I entered high school, because I couldn't read any form of cursive, and had difficulty reading standard English.


"I was taught a system prior to High school, called I.T.A, and it was designed to develop pronunciation over spelling. Which, I think is a bit short sighted of them. It resulted in me writing words as they sounded, rather than as they were spelled. So yay, go them! Producing children which might be dyslexic, but they'll never know.  Apparently the schools in Britain are going to re-introduce this system, but it might be called something else."

So the books which started me off, are the ones that had the most interesting pictures, namely ones like:-
Fighting fantasy
Lone wolf
and other ones that relied on imagination to create the details of the stories.

Interactive fiction allows more of a first-person perspective, within a tale, and includes the chance to make decisions as to how the story progresses, instead of reading a story which dictates every single step and is quite linear.

I have downloaded a little program that allows interactive fiction books to be written, and can be fully published to the internet, and there are other methods I do believe.  The program actively handles the mechanics of dice rolling, and randomness, along with being able to present a tale with animated pictures, sounds and a whole host of other aspects that aren't available with traditional books.

There are other programs available, but that is the most flexible, and complete one that I've found so far, and it also allows me to make stories without a web browser, or any other programs, other than itself open on my computer while I create the story.

Radio D.J'ing: Now this one is kind-of a voluntary thing, and I'm about to do my first show this evening, or at least I'm going to try.  I'll be on air/web from 9.00pm until mid-night if all goes well.


The station plays metal, rock, and such similar genres of music, so I'll be bringing more symphonic metal and a more gothic kind of feel with my musical tastes.  It doesn't pay, other than with experience, but that's good enough for me.  I just have to hope that my poorly computer can deal with it.

Anyway, that's enough for my first post., other than to provide you with a link to some of my youtube videos too.  I plan on creating more but only after my computer works properly again. Here.